It’s no secret that Denton has made significant headway over the years in many areas such as healthcare, technology and the arts.

Another noteworthy notch in its belt are the advances that have come about in transportation, thanks to services such as the Denton County Transportation Authority.

On Wednesday, June 3, 2015, residents and leaders from the Denton community, including the City of Denton and Denton Chamber of Commerce gathered at the corner of Kerley and Duncan Street to celebrate the latest enhancements to the DCTA Denton Branch Rail Trail.

The purpose of the project is to enhance services to the communities of Lewisville, Highland Village and Denton, provide the community with alternate means of travel to and from different points, and to provide easy access to train stations beyond walking or driving.

The 22.6-mile long trail is part of the North Central Texas Council of Governments (NCTCOG) Regional Velorweb trail system and is designed to be used by pedestrians, bicyclists and other non-motorized forms of transportation from Denton to Dallas.

The project has been divided up into three phases, spanning 8.1 miles between the Downtown Transit Center to Swisher Road in Lake Dallas, 6.5 miles from Hebron Station to Highland Village/Lewisville Lake Station (still under construction), and 8 miles from Swisher Road to Kelton Road in Hickory Creek (construction to begin in a couple of months). The expected completion date for the project is late 2017 with an estimated $22 million investment. 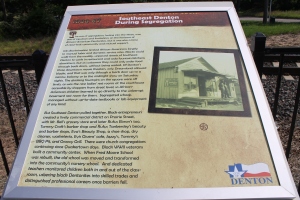 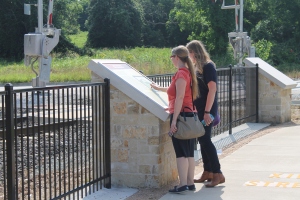 DCTA has led the charge in public transportation for the improvement of Denton County’s economy and environment and is committed to providing safe, customer-focused, and efficient solutions for its residents while encouraging environmental awareness via mass transit options, according to President, James Cline.

City Councilman, Kevin Roden, spoke to the benefits of the Rail Trail being a direct lead to people, places, and events that Denton has to offer, as well as a great opportunity to highlight the historic South East Denton, which was not present before.

DCTA would like to thank its Board of Directors, Denton City Council and members of the Southeast Denton Neighborhood Association for their continued support of this project as well as all who were in attendance at the inaugural event.

Parting gift given to event attendees